Just in time for some great summer reading is an amazing new movie book titled “Danger on the Silver Screen” written by TCM Senior Director of Original Programming Scott McGee. One of the pleasures in my life is to know a lot of the folks at TCM and Scott is one of them. So I thought I’d take the time to give Scott the opportunity to talk about the book and how a young, self described film geek (a lot like me), got to work for the greatest network for classic films that exists today, TCM. Here is my conversation with Scott. After reading go buy the book!!

Hi Scott and thanks so much for consenting to this interview. And also thanks for being a part of the very successful back in-person TCM Film Festival that took place in April in Hollywood, CA. Let’s begin at the start of TCM…When did you start at TCM and what was your first job at the network? 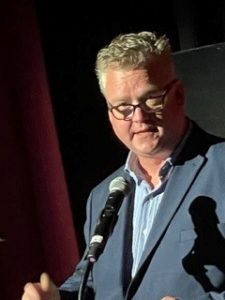 TCM hired me in July 2000.  My first position was as a production assistant in what was then called On-Air Promotions.  I would make clip reels and also wrote ‘menus’, which were the scripted segments that came on after every movie telling you what the next three films were.  Menus still air, but they are no longer voiced.  Back then though, we wrote every one, and then as a production assistant, I started to supervise the voice over sessions, making sure names and titles were pronounced correctly.  I then started producing actual promos as well as some of the TCM Remembers pieces.

What experience did you bring to the job when you first started?

First and foremost, it was a knowledge of film history.  This was a prerequisite at the time.  I also was a very good writer, so that helped immeasurably in making myself as essential as possible.
What is your position now at TCM and what does that job entail?

My title now is Senior Director of Original Programming.  I oversee the creation of original content that supports the films we show on the network.   If there is a 7-minute piece that is about, say, Star of the Month Dorothy Dandridge, I hire a freelance writer/producer to put it together with my overall direction.  Then I advise on the edit and work with the producer in bringing it to air.  But then there are a lot of other things outside of that dimension of the job too, such as programming the film festival and the cruise, as well as producing live events for both of those and more.

Are you a lifelong film buff?

My first film experience that I remember was my father taking me to see YOUNG FRANKENSTEIN at a movie theater in 1974.  I remember Gene Wilder playing the violin, coaxing the monster back home to the castle.

Personal faves in no particular, non-comprehensive order…THE SEARCHERS, SUNSET BLVD., VANISHING POINT, RAIDERS OF THE LOST ARK, INVASION OF THE BODY SNATCHERS (’56), IKIRU, THE GENERAL, ALMOST FAMOUS, THE THIN MAN…
Guilty pleasures…hmm…WYATT EARP (’94)…not that there’s anything particular to be guilty about, but it is a critically maligned box office bomb, but I prefer it to TOMBSTONE released the same year.

How did the idea for book come about?

The germ started in graduate school.  For my masters in film studies, I wrote a paper on the stuntwork of Fairbanks, Keaton and Lloyd.  That’s when I started to put some research to the idea.  But the thought of a book didn’t really occur until years later, when I started digging more and doing serious research, almost as a hobby.

From start to finish how long did it take to complete?

When I first started to shape the research into actual writing, through the actual publication of the book, I’d say about 10 years. 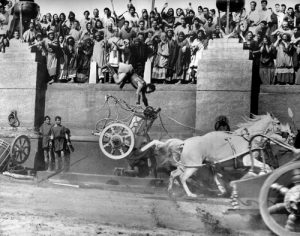 Do you have a favorite interview or two that stand out?

My phone interview with stuntman Joe Canutt was the highlight.  Joe was the double for Charlton Heston in the BEN-HUR chariot race.  Talking to him was like talking to movie history.  He sounded just like his father too.

How did you narrow the selections of films down? How many were considered?

Over the years, I maintained a spreadsheet of over 400 films that I watched and took notes.  It was very difficult narrowing down to what was originally supposed to be 30 films for the book.  Shortly after I started to write, I knew I’d need 50 to tell certain aspects of the story of stunts.  In terms of what I jettisoned, it was a matter of asking myself, have I already covered this dimension elsewhere in the book?  So for example, there were a number of Westerns featuring incredible stunt coordination by Yakima Canutt, such as DARK COMMAND and WHEN THE DALTONS RODE.  But I had already discussed Canutt in STAGECOACH and would again in BEN-HUR.

Were there any “Holy Mackeral” moments when someone you were interviewing told you something that totally blew your mind?

When I interviewed stuntman and fight choreographer Jeff Imada, he shared with me that Yuen Woo-Ping, who devised the wi-fu stunts of THE MATRIX series, had learned the basics of stuntwork from American stuntmen while working on the 1966 production of THE SAND PEBBLES.

Were there legends you got to interview that made your hair stand on end?

Terry Leonard.  I’ve interviewed him many times, and I still am in awe of him. 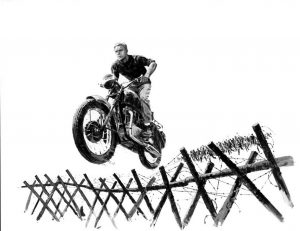 Who would you have liked to interview that are no longer with us?

Carey Loftin—he was a major figure in the book and the kind of character that would be perfect to make a movie about.

Why should stunt people be eligible for Academy consideration?

Because what they do every day in every job, big or small, is apply what is right there in the title of the Academy itself: art and science

They are different tools, that’s all.  But it is how filmmakers use those tools that make the difference.  If you don’t believe that a human being is moving through that space without even the smallest hint of risk, then you are not as invested subconsciously into what is happening to the characters in the story.

And finally, is Steve McQueen still the coolest cat that ever graced the big screen?

A few last words about the book. It’s great and I’m not kidding. It captures all of the great action movie moments we have come to love and explains each scene adding a nuance to them that is educational and entertaining. I discovered and learned things in the book I never knew. It is also filled with a drove of never-before-seen pics to enliven the behind the scenes stories being told. It’s a good one to add to your move book collection!

Visit Running Press to learn more about the book and where to purchase a copy.