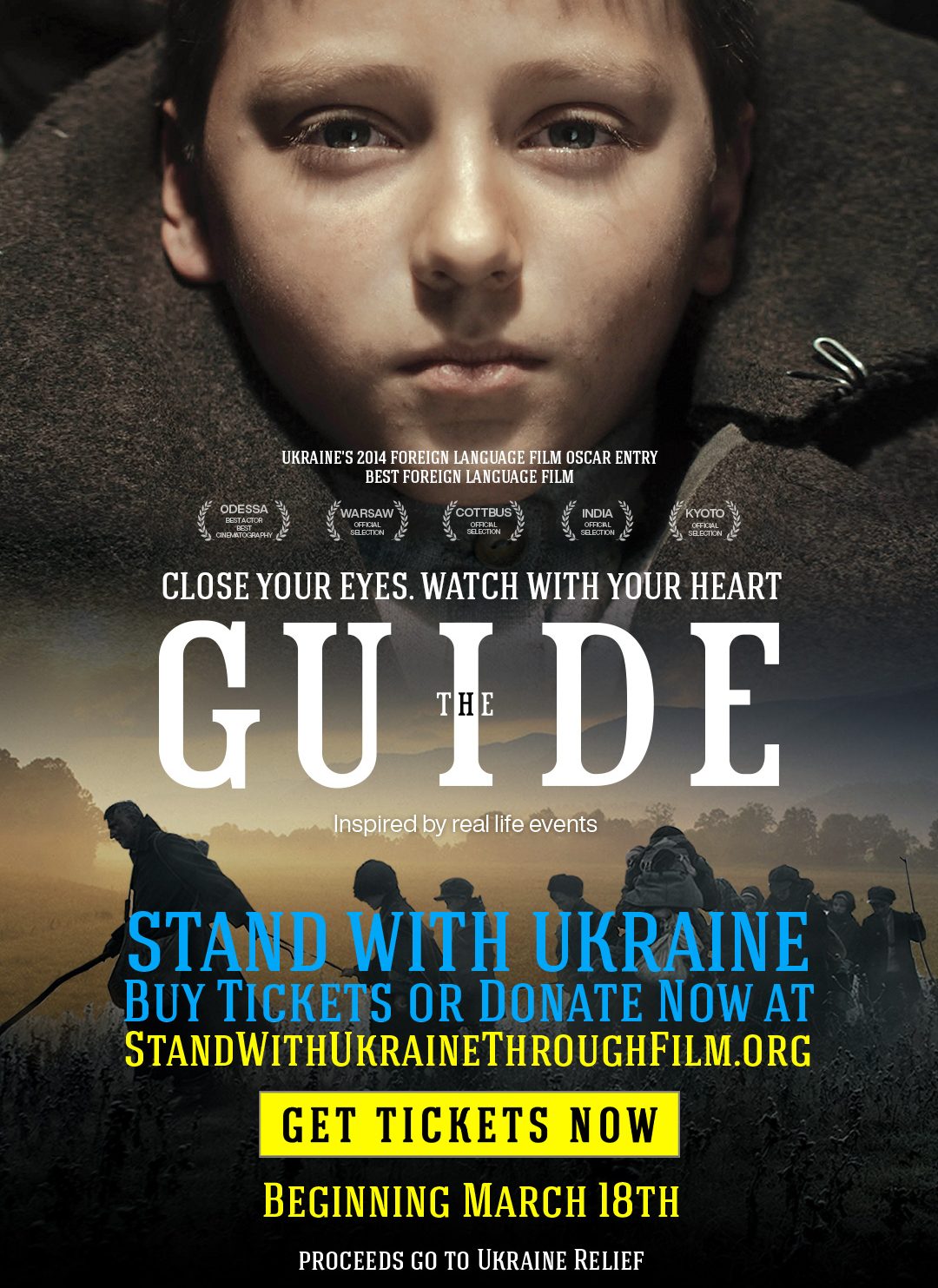 “STAND WITH UKRAINE : THE GUIDE,” BOX OFFICE PROCEEDS TO BE DONATED TO UKRAINIAN RELIEF EFFORT

Los Angeles, CA-Kyiv, Ukraine (March 14, 2022) On Friday, March 18, many leading U.S. movie exhibitors will begin to play Oles Sanin’s acclaimed feature film THE GUIDE, subtitled, in their theaters with box-office proceeds to be donated to Ukrainian Relief Efforts.  The film’s director and producer, Sanin, is currently locked down in Kyiv, but has just provided a moving introduction now attached to the movie. It conveys the urgency of the situation and the need for assistance.

Ukraine has a rich history of filmmaking that reaches back more than a century. For much of that time, Ukraine was part of the Soviet Union, but in the last 30 years Ukraine’s film industry has stood on its own. Indeed, before Russia’s 2022 invasion, Ukraine was a vibrant center of film production.

In the 1930s, the Soviet regime pursued agricultural and other policies that led to the deaths of millions of Ukrainians.  This “Terror Famine” represented a genocide aimed at Ukraine.  In 2014; Ukrainian filmmakers produced and released THE GUIDE, a drama set in the 1930s depicting this Soviet oppression.  The drama was selected as the Ukrainian entry for the Best Foreign Language Film at the 87th Academy Awards. The film also won the Best Actor and Cinematography awards that year at the Odessa International Film Festival. In addition, Oles Sanin’s film was nominated for the grand prize at both the Odessa and the Warsaw International Film Festival!

Donations from cinemas will be forwarded to a special Ukraine Relief Fund that is being managed by Human & Civil Rights Organizations of America, Inc.  Marshall Strauss, a long-time human rights activist, is board president of this national group which was established in 1994 and has handled millions in donations.

“Less than two weeks ago, I offered my cinema in suburban Boston to show THE GUIDE as a fundraiser for Ukraine relief,” said Marshall Strauss. “Almost instantly, the effort exploded in size and key industry leaders joined the project, donating their services.  Now, cinemas across the country are agreeing to show this milestone movie.  The director and I agreed on only one condition:  TICKET PROCEEDS are to go to humanitarian relief for Ukraine. Americans have this unique opportunity to stand with the people of Ukraine.  We are all looking for a way to help.  We now have it.”

Proceeds from the fundraiser will be forwarded to selected nonprofit 501(c)(3) organizations already active in providing humanitarian assistance to the Ukrainian people in Ukraine and nearby countries.  Among those to be supported will be the International Red Cross and the International Organization for Migration.

To support the effort, the Digital Cinema Distribution Coalition will be delivering the film by satellite, while PaperAirplane Media will provide the marketing assets and necessary support materials. Distribution will be handled by Falling Forward Films.  All parties are working free of charge to ensure as much money as possible is delivered to the Ukrainian people.