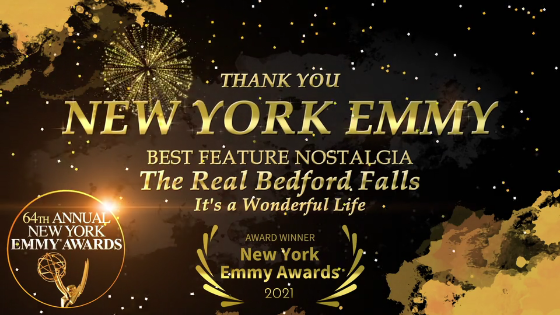 We just won an EMMY! Just saying those words seem like a surrealistic dream. But it’s true. When our company got involved in releasing the film “The Real Bedford Falls: It’s a Wonderful Life” little did we know that it would be the beginning of a great relationship with a terrific and talented group of filmmakers and that their friendship and generosity would lead to being included in this honor. We are extremely proud of the work we did on the release of the film that will continue through 2022 and onward. You can enjoy it to as the film continues to be available on all of the transactional sites you know and love.

“It’s a Wonderful Life” is a film that stands the test of time. It is beloved by many and stands as a testament to it’s director Frank Capra who firmly believed that one man can affect and change the lives of so many by just being a good and decent individual. This timeless story never gets old. Our film “The Real Bedford Falls: It’s a Wonderful Life” tells the story of Seneca Falls, NY a town based in the northern part of the beautiful Finger Lakes region of NY that more than a few folks believe to be the inspiration for Bedford Falls which is the town George Bailey (Jimmy Stewart) resides in. Whether you believe this or the old John Ford quote “When the legend becomes fact print the legend” doesn’t really matter. Over 25,000 “IAWL” fans show up each December to celebrate this classic film. That says something!

As is customery when one wins an award like this there are people to thank. So let me send out a huge THANK YOU to the amazing Joann Storkin, Francis Clemente, Stu Lisson, Kim Thigpen Tyler and Chris Carpenter. We are honored to work with you. 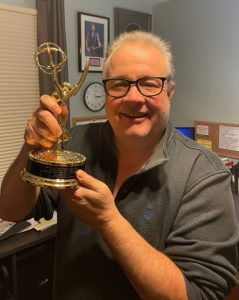