Springsteen, Chaplin, and Me

These last few months have been particularly engaging for me in a lot of ways. I’ve been remiss at putting to paper a new Presidents blog so I will attempt to make that right, here and now. It’s been a busy time with trips both overseas and down to the Jersey Shore. Not the one from the disgustingly illiterate TV show but the real Jersey Shore. I’ll begin with that… 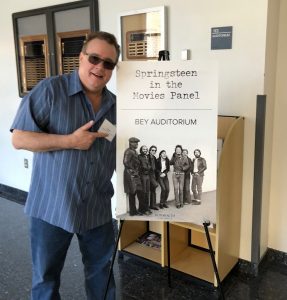 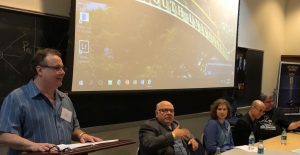 Last weekend I was honored to moderate a panel at Monmouth University’s Bruce Springsteen’s Darkness on the Edge of Town: An International Symposium held on the grounds of the prestigious bastion of higher education.

Monmouth University was at one time the summer home of President Woodrow Wilson and his presence is definitely felt as you walk the hallways of Wilson Hall where some of the festivities took place. Monmouth is also the new home of the The Bruce Springsteen Archives and Center for American Music.  Led by Eileen Chapman and her remarkable team they will be the home of Springsteen archives along with other notable Jersey citizens who have gone on to fame. So it was the perfect spot to hold this conference.

Our panel’s topic was Bruce Springsteen in the Movies. We attempted to explore the popularity of Springsteen songs in such well known films as “High Fidelity”, “Philadelphia”, and “Baby It’s You” alongside some lesser known movies like the rare and little seen Israeli film “Dead End Street”. My panel consisted of some heavyweights in their own field including Alex Biese, entertainment writer for the Asbury Park Press, Irv Slifkin, author of “Filmadelphia,” and Shawn Poole, Contributor for Backstreets.com. We were also joined by Caroline Madden who is currently writing a book about the very same subject. If you love Springsteen this was the place to be!

Back in February, I took a plane into Geneva Switzerland and made the 90 minute drive to Vevey, alongside the take your breath away views of Lake Geneva, to visit the home of the legendary Charles Spencer Chaplin. It’s hard to describe what the Little Tramp has meant to me throughout the years. He has been a constant companion who always seems to make me laugh, make me cry, 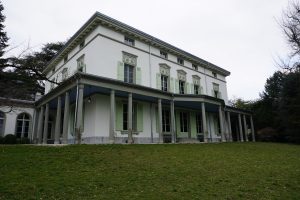 and make me wonder at the world that surrounds me. I’ve studied his early shorts, his feature films and even his later work in the sound era. Charlie had always been the one for me. So when people ask me that question – that is always so hard to answer for most folks – for me it’s easy. My favorite film of all time is “City Lights”. And yes it’s in black and white. And yes…it’s a silent film. 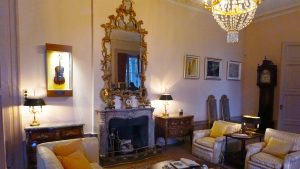 Inside the Manoir de Ban

“Chaplin’s World” as it is called is part museum/part estate and sits on the grounds where Charlie and his family lived from 1953 until his death on Christmas Day, 1977. The entire complex is open to the public year-round and has turned into a Graceland of sorts only this time honoring the film pioneer. Inside the museum after a brief film on the comedians’ life the visitor moves through a series of rooms where Chaplin’s films from “The Gold Rush,” “The Kid”, “Modern Times”, the above mentioned “City Lights”, “The Great Dictator” and more come to life. It is as if you are right there on the set with Charlie, re-creating those famous scenes.

After exiting through the obligatory gift shop that is filled with books, mugs, T Shirts, DVD’s and all sorts of Chaplin goodies you move across the lot and into the Manor which has been kept as it was when the Chaplin family inhabited it. Room after room is filled with artifacts from the family’s life including Charlie and Oona O’Neill Chaplin’s wedding certificate, among other items. The desk where Charlie wrote the script for “Limelight” is there along with awards, medals, letters from notable people and a library of books that would make anyone jealous. 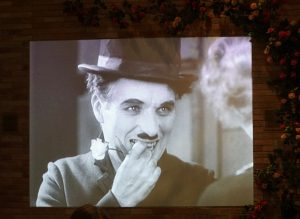 Chaplin lived a good life in his later years and was surrounded by friends and family in what I am sure he felt was his own personal paradise. It was an amazing visit to a truly inspiring place. Nothing at Chaplin’s World is gaudy or in bad taste. Instead it is an exquisite look at one of the men who made movies famous and helped turn them into an art form for the ages.

Chaplin’s films will live a long time after I am gone. We are all a bit richer because of that.