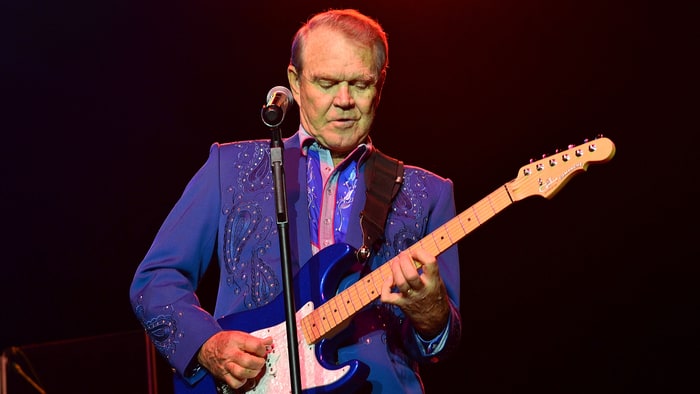 I had the pleasure and honor to see Glen Campbell in concert twice in my life. The first time was at the beginning of his farewell tour after Glen announced to the world that he was suffering from Alzheimer’s. I attended one of the first shows that was held in Philadelphia. Not knowing what to expect I approached that night with a fair amount of trepidation. Glen had been a hero of mine musically speaking as I had spent most of my adult life being a fan of the music and the man. So I wasn’t sure what to expect. I know what Alzheimer’s can do to a person. We all know. But what transpired on stage that night was mesmerizing and quite inspirational at the same time. On that night, in that place and on that stage Glen Campbell kicked ass and took no survivors. He sang his heart out and when he played the guitar it was like the Lord was playing right there with him. His fingers moved across the guitar never missing a note or a beat. Whatever that was that he carried with him in his music had not wavered, had not diminished and was still there. The audience responded in kind with a rapturous applause and by the end of the night we all knew that what we had just witnessed was something downright spiritual. Something for the ages.

The second time I saw Glen Campbell was months later towards the end of the tour. The guitar playing had stayed intact. His masterful playing had still not ceased inside of him. He moved a bit slower and was struggling with the words spoken in between songs. But not enough to bother the audience who once again gave him a standing ovation fit for a king. It would turn out to be one of his last shows.

Later that year my company had the privledge to get involved in the release of the James Keach documentary on Glen titled “I’ll Be Me”. This award winning documentary followed Glen on the tour I had attended. It’s an amazing film, emotional yet inspiring in the same way Glen was. Glen and his wife Kim made the decision to go public with his condition to bring awareness to the disease that afflicts so many of us. It was a heroic and selfless thing to do. The film accomplished that in so many ways and will continue to do so.

Rest in peace Glen. Thanks for the hours upon hours of great moments you left us in song. We will be listening for a long long time.