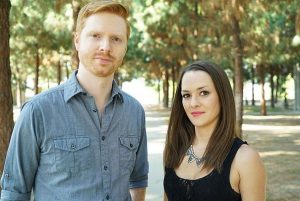 1. Why did you decide to follow Rev. Frank Schaefer’s story? What was the inspiration behind this project?

Kate: It was Scott who first learned about Rev. Schaefer’s trial and subsequent defrocking back in late 2013. He reached out to Rev. Schaefer to determine his interest in having a documentary crew follow him. Despite his busy schedule, Frank got back to Scott and a few weeks later we were already shooting our first interview with him. I was interested in working on this project because I had just wrapped the first film I had directed, Kidnapped For Christ, which featured a gay teenager whose parents sent him away to a reform school overseas. After witnessing the harm that was being done to so many LGBT youth by religious communities, I found the story of the Schaefer family and the many others in the United Methodist Church who had fought and sacrificed for LGBT inclusion in the Church to be refreshing and inspiring.

Scott: I learned about Frank Schaefer’s trial from a news article as it was underway. I was so moved by the story of a father who risked his career as a United Methodist minister to officiate the wedding of his gay son. It had elements of family, love, and faith, while also being a pseudo-courtroom drama. I’m the son of a United Methodist minister and I grew up in small towns in the Midwest, so I have a lot in common with the Schaefers, who lived in rural Pennsylvania at the time. Our common ground was a big reason Frank agreed to allow us to make AN ACT OF LOVE. The timeliness of the story, and the fact that the United Methodist Church is currently struggling with issues of homosexuality, I knew we needed to begin filming right away.

2. How did you approach your subjects for the film? Was it difficult and/or simple to secure interviews?

Kate: Our approach was fairly simple – we presented our potential subjects and interviewees with our vision for the film, explained that we were committed to hearing from all sides of the story, and then let them decide if they wanted to participate or not. For the most part, we didn’t experience a lot of difficulties in securing interviews, however, there were a few key hold-outs that we had to work hard to convince to talk to us. Most of those folks were people who were in opposition to Frank and to same-sex marriage within the Church. After several months of reaching out, talking to people about our vision for the film, hearing their concerns, and getting hung-up on a few times, we were able to get enough people from “the other side” to fill out the story and honestly show both perspectives.

Scott: My family has deep roots in the United Methodist Church, so although I didn’t know any of the interview subjects personally, I had family ties to several of them. That was helpful in securing a few interviews. Because of my history in the church, we had a commonality and common language that helped a lot.

3. Was there a moment(s) during the filmmaking process you both found difficult?

Kate: The easiest answer to this is probably the same one any independent filmmaker would give – fundraising. We were incredibly fortunate on this project to have robust support from the United Methodist community and from individual donors, but I don’t know of any filmmakers who enjoy the fundraising process.

Scott: I edited most of the film myself, and it can be hard to cut out material that I’m personally attached to. So Kate and I relied on multiple test screenings and outside feedback to shape the final film. A steady stream of “fresh eyes” was invaluable to shaping this complex story in a way that is compelling and also informative.

4. What would you say was the most rewarding experience about this project?

Kate: As someone who came from an evangelical background and saw many of my friends struggle with their faith and sexuality, I am proud to have helped produce a film which shows that no one has to make a choice between their faith and their sexual orientation. There are many films and books out there about people being kicked out of churches and rejected by their families, but few tell the stories of those within their churches who are fighting to change this. When someone who has felt like they could not be LGBT and Christian watches our film and leaves feeling that they don’t have to abandon their faith in order to live an authentic life and have fulfilling relationships, that’s the most rewarding feeling for me.

Scott: We’ve had over 150 film festival and community screenings, and it’s been great experiencing the film with audiences and meeting people whose lives have been impacted by the issues discussed in the film. Many people have a deep appreciation for the stand that Frank Schaefer took for his children and for the LGBTQ community, and that’s apparent at screenings everywhere we go. It’s been an honor to be able to tell that story on film.

5. What are you hoping people take away from this film?

Kate: One of our main goals for this film has always been for it to be used as a tool for discussion and dialogue within communities of faith who are divided on the issue of same-sex marriage and acceptance of LBGTQ individuals. It’s great when those who are open and accepting already watch the film, but we also created it specifically to appeal to those who are on the fence or who disagree with our views.  This isn’t a film that pits scholars of the Bible against one another, it’s about the real lives of those who are LGBTQ and their families and friends and how Church policies impact their daily lives. We hope that the Schaefers’ story will help build bridges of understanding between people and communities, because everyone can relate to a father who is trying to do the best by his son.

Watch AN ACT OF LOVE on iTunes.