In spite of it all it really is “a wonderful life.”

I spent last weekend in Seneca Falls NY, or what the townies there refer to as “Bedford Falls”. That’s right. The same Bedford Falls that appears in the cherished Frank Capra film “It’s a Wonderful Life.” There is even a bedfordfalls.com tourism site. It seems that the town came up with the idea that Capra created Bedford Falls after driving down Main Street before production started. There isn’t any proof to this legend and if you drive through Seneca Falls it is a picturesque replica of what small town America looks like. But Main Street in Bedford Falls it is not. At this point I say “does it really matter?’ Not to the thousands of George Bailey fans who ascended onto Main Street for the annual celebration last week. There was a parade, an old time dance and a swanky recreation of the dinner that was held at the Ambassador Hotel in Hollywood after the films premiere. If you walked the streets heading down to the “It’s a Wonderful Life” museum you might have bumped into Old Man Potter or Uncle Billy or even George himself toting that suitcase bought for him by Mr. Gower. And if you were really lucky you might have gotten to meet one of the three Bailey Kids (Karolyn Grimes, Carol Coombs and Jimmy Hawkins) in attendance who signed autographs and attended screenings of the film all weekend long. They were joined by Mary Owen, the daughter of Donna Reed and Monica Capra Hodges, the granddaughter of Frank Capra. All of this for a movie that came out seventy years ago. Pretty amazing. The lasting impact this film has had on millions of people stretches all around the world. Capra’s message that all of us, no matter who we are or where we come from are important is something that continues to inspire year after year. That one person’s life affects so many others and that “no man is a failure who has friends.” This is the message that I took to heart as a young thirteen-year old movie buff watching the film on a local PBS affiliate a long time ago. This was well before the movie became everybody’s favorite film. Over the following ten years it grew in stature as TV stations across the land took advantage of its public domain status and aired the film constantly over the Christmas season. The reason people love this film is simple: it’s message not unique but one that we should live by. Capra knew this. He knew this film would have the lasting power it has. That was part of his genius.
There is a George Bailey in all of us trying to get out and do good things for people. We all want to be just like him. Sometimes it’s hard but we try our best. Even George got frustrated at times.
I had the very good fortune to meet Jimmy Stewart at an event held in Las Vegas where he was about to receive a Lifetime Achievement Award. As I approached him my mind raced at what I was going to say. He was an idol of mine and an acting legend. So I put out my shaking hand and just said “Mr. Stewart I just want to tell you that George Bailey is my best friend.” Stewart paused and then put his hand on my shoulder and said “Son, he’s my best friend too.”
What else is there to say?

Me with the infamous Karolyn Grimes (a.k.a. “Zuzu”) 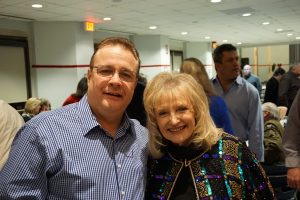