For today’s #FilmmakerFridays piece, we interviewed Justin Gaar. Justin has directed many commercials and documentaries, including Curse of the Man Who Sees UFOs. He spoke to us about his new documentary and past experiences. 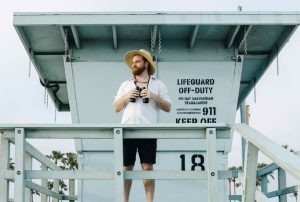 1. Tell us your filmmaking background and why you decided to pursue a career in filmmaking.

I began making VHS movies with my best friend in 5th grade. We built cardboard cities and would make stop motion disaster movies with G.I. Joes and a Gumby doll. Then we expanded to really strange little shorts after that. I always played music and was more oriented towards that as a pipe dream career. Then I went and saw American Beauty with my mom. She hated it and I was in love. From that day on, filmmaking was my new pipe dream. I purchased the DVD and watched it nearly every day for a year. I never realized films could be so powerful.

2. How/Where did you meet Christo? Was he the inspiration behind the documentary?

Christo had actually hired an editor and made a cut of his UFO movie prior to this film. He didn’t like the cut. He had a rep that sold him synthesizers and asked that guy if he knew any editors. The editor his rep knew is one of my best friends who lives in New York, so he passed it on to me because I had just moved to California. I watched Christo’s cut and thought it was really bad.  I honestly tried to get out of the project because I didn’t think he had a movie. However, something about Christo’s voice in the footage, despite him not being on camera, really intrigued me. I asked him to shoot more of himself on camera. He has such a mad scientist look and he’s obviously a character, so I had a hunch there might be something interesting in exploring who he was. We met up to talk about the footage. He told me a story about his first alien contact as a child and about his family back story, all while periodically checking the sky. I realized in that moment how to make a whole new movie. A movie about him. I never cared about UFOs. To me, this movie isn’t about UFOs at all.  I always wanted to focus on him.

3. What was the most difficult and/or challenging thing you faced during filming and/or post production?

The most challenging thing was always money and time, which is not unique to this or any film. I had just moved to California and, turns out, it’s super expensive. Christo got in touch with me really soon after moving. I was trying to find work, make connections in the industry, and desperately trying to not spend a dime – but also traveling five hours north of LA to Monterey and staying with Christo when I could. It was tough to find the time between freelance gigs and the money to travel. I also needed to take time off for post-production and to edit the feature. That took away from time I had to freelance and pay my bills. I ended up working a lot of 12 hour days on set and edit bays, traveling home, then starting to work on the movie again.  That’s also why it took three years to wrap up. Getting the movie out into the world was financially a challenge too. Even if you make a movie for $10 and are as lucky as we were to find distribution, you still need to pay for various post-production final touches, hire lawyers to make sure everything is legally in order, clearing rights, etc, and you have to purchase expensive insurance. It’s a real challenge. I had always worked on other projects produced by other people so I didn’t know to plan for any of that, or really didn’t have a budget in the first place. I learned a lot during the course of this movie.

4. Did you find anything interesting and/or surprising about this particular subject while filming?

I guess what I found most interesting is how many people have had a UFO sighting of some kind. We met so many people that said they’ve seen a UFO. My family, who lives in conservative North Carolina, was pretty quiet throughout production, I assume because they thought I’d finally lost it and joined a UFO cult in California. When they told their friends in the suburbs of Charlotte about what I was doing, people would respond with, “Oh, I’ve seen one before!” I’ve gotten so many emails and private messages through Facebook from people saying they’ve seen them before and they’re sure we aren’t alone in the universe. People of all walks of life claim they’ve had an encounter. I never would have guessed it but UFO sightings are this great unifier, apparently. In these divisive times, maybe this movie is what everyone needs?

5. What advice would you give to someone who is interested in documentary filmmaking?

I’d give the same advice for documentary as for narrative fiction. You gotta just do it. All I had was a 7D and a video mic, which are not the tools to use to go about making a feature film at all. I was broke and it’s all I had. What was I gonna do, not tell this wild story I’d just found?  You gotta just do it. If you can tell a story, people won’t care about the technology or the limitations you encountered. They’ll just remember the great story. At least, that’s what I’ve learned.