Meet Ryan Steven Green, director of the upcoming documentary, The Hollywood Shorties. Ryan has produced and directed many films including Circle of the Wagon. He spoke to us about his new film and how he began a career in filmmaking . 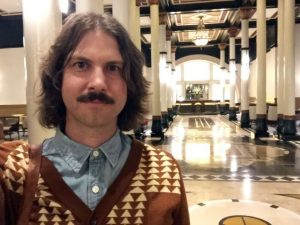 1. What inspired you to pursue a career in filmmaking?

Looking back over twenty years of filmmaking, it’s become somewhat difficult to pinpoint how this all started. What I do know is that at every turn, I continued to choose filmmaking, particularly documentary. I can identify a couple pivotal moments that directly impacted my path. The first was applying to the film school at USC. While I was already a couple years into my filmmaking hobby at the time, I entered USC majoring in civil engineering and as a pitcher on the baseball team. In three short semesters, I had dropped both. I applied to the film school and was accepted. The second moment of consequence was post-graduation, post-first-job and post-solo-world-travels. At the outset of 2006 I decided that I was a director, and that was the only career path I was going to follow. Somehow, ten years later, it’s worked out.

2. Your documentary follows a group of Hollywood actors who were part of a nationwide touring basketball team in the 80s. The film features many interviews from the various team members. Was there a particular interview and/or moment that stood out to you?

This moment I would place as the pre-interview I did with George Rossitto and his wife Sue. There were no cameras rolling, but the importance of this meeting at his house cannot be understated. While all sources pointed to George as the man I needed to talk to in order to make the documentary happen, over the course of several phone conversations he remained difficult to convince. I finally offered to drive to his house and answer any questions that he had about who I am or what I intended to do with the documentary. The day that happened we were together for around three hours, during which time I could see the ice melt and the resistance fade, and I knew we were going to have a documentary.

3. Did you find anything interesting and/or surprising that you didn’t know about the team prior to filming?

Crazy as it may sound, I knew nothing but the name when it came to the Breakers and nothing at all about the DAAA. I was absolutely clueless what a large part these two entities played in the demise of the Hollywood Shorties. Until I learned about them, I thought I was making a short doc just about the Shorties team. But once I had been introduced to the Breakers and the DAAA I knew we had an actual story that could easily fill up 90 minutes. In fact, it is difficult now to imagine a Hollywood Shorties film without these.

4. Do you have any favorite films and/or directors that influenced you as a filmmaker?

I am a huge film buff, but this isn’t a question I like to think a whole lot about. There are certainly directors and individual pictures I greatly admire. Among them: Charlie Chaplin, Michelangelo Antonioni, PT Anderson, Robert Altman, Stanley Kubrick, Jean Renoir. But to what extent they influence my work, I’ll leave to the critics!

5. What advice would you give to someone who is interested in documentary filmmaking?

Consider what stories you alone are capable of telling; are you prepared to go there? Consider if you have inside of you what it takes to finish; nobody is going to do it for you. Consider that you will need to support yourself in some way.