Meet Mark Shuman, director of the documentary ‘Morphine: Journey of Dreams.’ After meeting the Boston-born “low rock” band, Mark decided to film the band’s unique story. He spoke to us about his experience filming this one-of-a-kind music documentary. 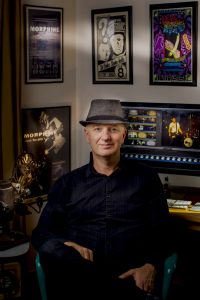 1. What drew you to filmmaking?

My love of films. As a kid, I would go to movies and matinees and it was an escape into another world. I went on to study film at the University of Texas and started working on independent films in LA after that. As far as documentaries, it was a natural progression after working for many years on national productions of all types – commercials, music videos and television. After years of working with huge crews, the idea of doing something like a documentary, which I could do largely without the help of others, appealed to me.

2. Before filming ‘Morphine: Journey of Dreams,’ what was your connection to the band? Why did you decide to make them the center of your documentary?

I owned a live music venue in Austin, TX in the 1990’s called The Electric Lounge. The band Morphine played there and we became friends just as they were getting national recognition. We used to hang out when they were in town and I would watch Dana Colley (Morphine Sax) write in his journals. We talked about it then, and later when the band had such an unfortunate end, I thought about those journals for years.  Many years on, I could see that the band was not really getting the recognition they deserved in history. I felt it was a compelling story that needed to be told. Their music and sound are timeless so that made it attractive to me as well.

3. What would you say was the most difficult thing you faced while filming and/or post production?

I think making a documentary as an independent can be a lonely job. (Be careful what you wish for!) Filming was one of the easiest parts for me and happened relatively quickly. Editing and post-production were time consuming and challenging. The sheer amount of days and months spent working over the details with the editors for a 90 minute documentary is incredible. There are always challenges…budget, schedules, clearances and there are unforeseen costs which come up along the way. I don’t think there is any way to know how it is really all going to come out and there were many times I wondered if I would finish the film. There is certainly no way to know how it will be received. Fortunately, it all worked out for me in the end.

4. What advice would you give to someone who is interested in documentary filmmaking?

Try and find a subject you are passionate about. Then, set up a realistic budget and timeline for completing your project. Many documentaries are filmed but never make it through the rigors of editing and post-production. Try to find someone who has done it before to meet and talk with them for advice. Remember, if you are not lucky enough to be a breakout film at a major festival, around 50% of the work happens selling the film when it is completed. Most importantly, do something to further your project every day, no matter how big or small it is.